Cell therapy is the safest and most secure treatment

Heart failure is a condition in which the heart is unable to pump enough blood to different tissues in the body. In simpler terms, heart failure means a drastic reduction in the function of the heart, meaning that the contraction or expansion of the heart is reduced and it cannot pump enough blood. A heart attack is the most common cause of heart failure that destroys both some heart muscle cells and the ability of these cells to contract. Therefore, the contraction power of the heart decreases. In the early stages of the disease, the patient may not exhibit any visible symptoms. However, it may gradually develop as the patient shows sign of premature fatigue, shortness of breath, decreased energy, shortness of breath during activity, and in more severe cases when the patient is at rest, palpitations, and irregular heartbeats.

Some treatments for heart failure, include medications, surgery, and in more severe cases, a heart transplant. Prolonged treatment, high costs, and risks during operation are some of the reasons that researchers are looking for new ways to treat patients with heart failure. 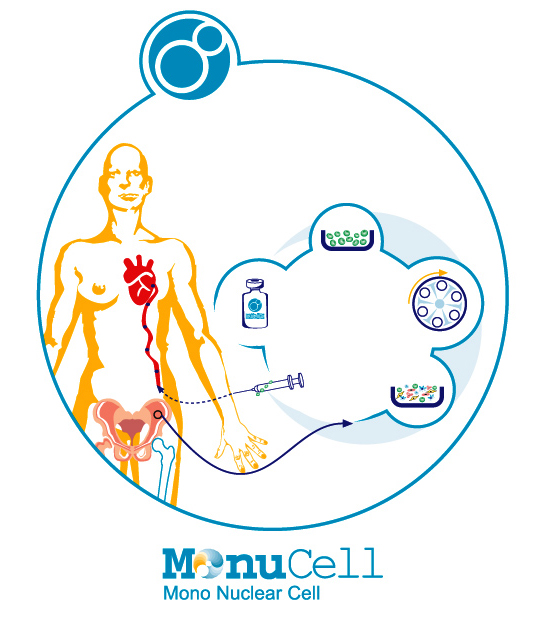 Studies have shown that transplantation of stem cells into the heart muscle of patients whose had heart attack can improve heart function and quality of life. In collaboration with other scientific centres, cell therapy in cardiac patients at Royan Research Institute began in 2007 on patients with acute stroke and heart failure. In this method, a tissue sample is first removed from the patient’s bone marrow and transferred to Celltech Pharmed-Stem Cell factory. During 3 to 4 hours, the patient’s stem cells are separated and then transplanted through the coronary artery or directly to the patient’s heart muscle.

Celltech Pharmed-Stem Cell company calls these processed cells Minucell, which are the product of the bone marrow cells of patients.  Compatibility of this cellular product with the body, short recovery period, no complication during treatment and no need for injections of the cells in most cases are among the reasons that specialists have considered this approach extremely reliable for the treatment of patients with heart failure.

What types of stem cells are used to treat heart disease?

What types of somatic stem cells are used for heart disease?

In clinical trials currently being conducted at many research centres around the world, six significant types of stem cells have been proposed to repair cardiovascular tissue.

What is the primary source of stem cells, and how are they obtained?

Bone marrow: In this procedure, to take a sample from the hip bone, anesthetic is first injected. Then, bone marrow samples are taken using special needles for aspiration and sent to the laboratory for further preparation.

Adipose tissue: In this procedure, some of the excess body fat in the abdomen, thighs or sides is aspirated with a syringe.

Heart tissue: In this method, without opening the chest, a few tiny samples of the healthy area of ​​the patient’s heart tissue are taken in a similar way to angiography.

How are processed stem cells injected into a patient?

How long does it take for stem cells to show a healing effect?

According to studies, the beginning of the healing process of these cells is almost three months after the injection, but this effect can gradually increase for up to one year.

Based on what criteria do stem cells show an improvement in cardiac function?

This improvement can be seen in the following three general categories.

Prevention of adverse events such as death, recurrent heart attack, frequent hospitalization due to disease complications and heart transplantation.

Improving paraclinical criteria, including cardiac imaging on echocardiography, scanning, MRI, as well as special blood tests such as (Pro-BNP).

Can stem cells be used to treat all cardiovascular diseases?

Is the use of this method provided in all medical centres?

Currently, this method is used only in Shahid Rajaei Cardiovascular Hospital, Cardiac Center, Baqiyatallah Hospitalو Lavasani, Masih Daneshvari, Sasan and Bahman in Tehran province, as well as Imam Reza hospital, Montaseriyeh Hospital, Razavi and Javadol A’emmeh Hospital in Mashhad. The procedure can be performed in other hospitals if the necessary preparations are made.

Does this treatment have any particular side effects for the patient?

Although no method is considered 100% safe, no specific side effects have been reported so far.