Cell therapy is the safest and most secure treatment

Vitiligo is a skin condition in which the cells that are responsible for creating skin colour (melanocytes) are destroyed and will no longer produce skin pigment (melanin). Melanin is a pigment that determines the colour of our skin, hair and eyes. As a result, when some parts of the skin lose their brightness, this will create discolouration on the skin. This condition can occur anywhere on the body; however, the most common skin areas that are involved are face, lips, hands, arms, legs and genitals. The affected areas and the extent of the skin, which is affected by vitiligo vary from person to person. Usually, one or two out of every 100 people develop this condition. Roughly, half of the people will exhibit symptoms of this disease before the age of 20. More importantly, research has shown that patients that have vitiligo experience limitation in their social relationships, and it lowers their self-esteem. Vitiligo is much more apparent in dark-skinned people than in light-skinned people. Conventional treatments for this disease include topical ointments, immunosuppressive drugs, phototherapy, and lasers.

The high cost of these methods, the lack of a proper response to the patient’s body, the long course of treatment, as well as the possibility of blemishes reoccurrence, led scientists to seek for new therapies to provide treatment for this condition. 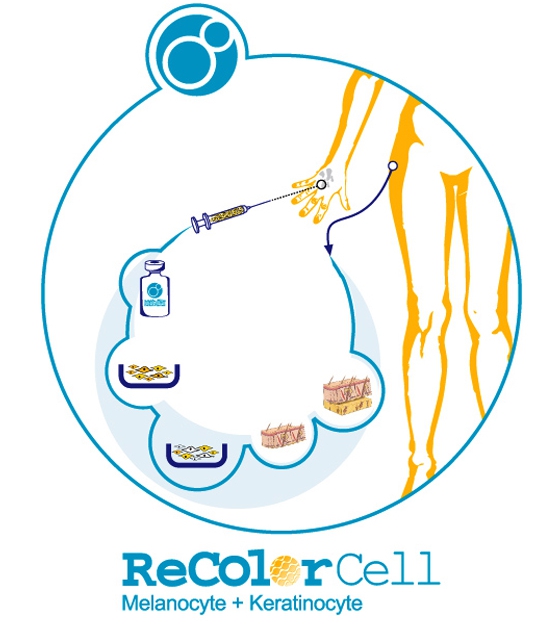 The world has always been seeking new treatments for incurable diseases.  Among various new therapies, cell therapy has managed to raise new hopes among patients. Cell therapy for vitiligo treatments has been performed in Iran since 2006 and in the world since 1987. In this procedure, the melanocyte cells are first removed from a healthy part of the body during a melanocyte cell sampling (Autologous) and then transferred to Celltech Pharmed-Stem Cell factory in order to perform the isolation process. One day after sampling, the cellular product, which is called Recallercel, will be ready to be injected into the targeted areas of the skin which has discolouration. The Recallercel product contains cells that can produce pigments which can improve the affected areas. Subsequently, the injected cells begin to multiply after a while, and pigment production increases.

There is no need to go through a lengthy recovery period, and there will be no wounds and blisters on the skin, which are among some of the benefits of cell therapy. Also, due to the origin of the cells themselves, the problem of transplant rejection will not occur in this method.

Are all white spots vitiligo?

No. Although one of the most common causes of white spots is vitiligo; however, it does not include all cases. Many other diseases, including skin changes following inflammatory conditions and some congenital moles, can be other causes of this type of skin discolouration.

What is cell therapy, and is there a history of its use in skin diseases? In this treatment, injured and defective cells are replaced by healthy and functional cells. Cell therapy in vitiligo has been performed in Iran since 2006 and in the world since 1995.

What kinds of cells are used in the treatment of vitiligo?

Because melanocytes are destroyed in vitiligo, for treatments, healthy melanocyte replacement cells are used, which is obtained by taking a sample from healthy areas of the skin.

Is it necessary to culture the cells before injection?

Who can use melanocyte transplant for the treatment of vitiligo?

Are there any side effects when a sample is taken from the skin in order to obtain melanocyte cells?
Sampling from the upper layer of the buttocks is usually performed under local anesthesia and does not pose a particular problem for the patient.

What is the treatment for melanocyte cells, and does the patient need to be hospitalized?

In this method, after selecting the patient and taking a sample from the healthy areas of the skin, the samples are immediately transferred to the laboratory, which will be held under completely sterile conditions. Afterwards, the skin cells are removed from the tissue, and one day after sampling the cells are sent for the injection. The treatment process will be performed based on an outpatient basis and does not require hospitalization.

What are the results of melanocyte transplantation?

Typically, 60% of patients have a reasonable or satisfactory response to this treatment, but in 40% of patients, the response is negligible or zero. The highest response rate was seen on the face and neck, followed by the trunk and limbs. Having said that, the success rate of this treatment may vary from person to person.

Are there any side effects from melanocyte transplantation?

This procedure is entirely safe and has no side effects for the patient. Because the cells have the same origin, transplant rejection will not occur.

Does nutrition play a significant role in the emergence, persistence or improvement of the disease?

So far, the role of nutrition in this disease has not been well established scientifically.

Can Vitiligo disease go away on its own?

Yes, in 20% of cases, the disease may improve on its own without any treatment.

Does cell therapy apply to other white spots?

Many other colourless or pale skin blemishes may be treated with this method, but it needs to be checked by a doctor.

Is there a need for medication or phototherapy after cell therapy?

Depending on the clinical and laboratory conditions, some patients are prescribed to have medication or phototherapy after transplantation,